Getting to Know Erik Grostic 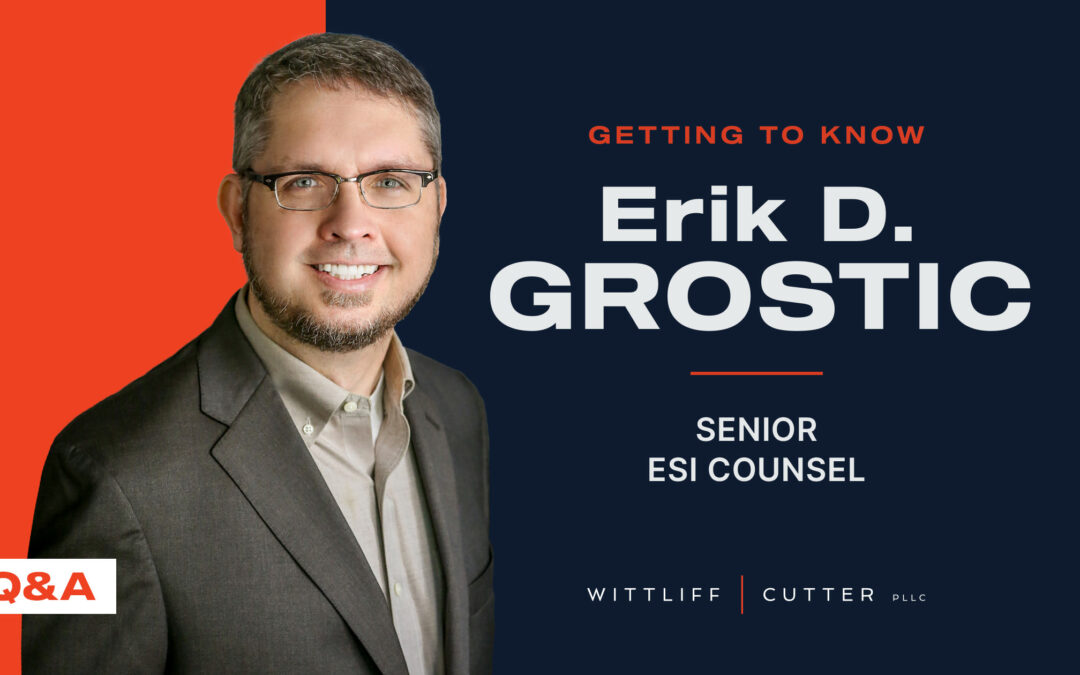 On the surface, Erik D. Grostic can be difficult to figure out. Is he a nerdy software developer? Cool musician with an IMDB page? Private, shy Midwesterner or outgoing Austinite?

Oh, and he’s also a trademark, copyright and IP lawyer.

“On any given day, our partners can ask Erik about the status of a client’s USPTO filing, a particular strategy on responding to a trademark examiner’s office action, or recent issues in copyright law,” said Wittliff | Cutter partner John D. Saba. “He’s incredibly knowledgeable, of course, but he’s also fun to be around. We think our clients feel the same way.”

As noted before, diversity is a cornerstone of our firm, and Erik certainly fits the bill. Keep reading to find out more about his software background, musical interests, and the impact he’s had on laying the groundwork for some monumental Supreme Court decisions.

1. Before you became a lawyer, you were a software developer at UT. Why did you decide to change careers, and are there any elements of your previous career that inform your current one?

Having a background in technology is a little like owning a pickup truck while your friends are moving – you can’t escape. But it’s a prior life that I always enjoy revisiting.

It’s uncanny how often law and technology serendipitously sync up. I was at the UT Libraries for a decade designing digital archives, institutional repositories, and metadata management software.

Then, during a small-firm clerkship in law school, I worked on a series of patent cases involving digital archives, which meant taking on the dual role of both law clerk and tech consultant. It was a good way to keep the technology side of things in play while becoming more familiar with the legal practice side.

At Wittliff | Cutter, I’ve worked extensively with eDiscovery platforms, which can feel like digital archives on steroids. My role at the firm is increasingly focused in this area, which is becoming more essential. I’ve been lucky that so much of my prior career is still a big part of what I do.

2. A quick “how to file a trademark” search will try to persuade us that we can take a DIY approach. Are there any pitfalls to filing your own trademark, and if so, how can a lawyer help avoid them?

While it may be tempting to take the DIY approach, a trademark attorney’s assistance during the application process is often invaluable. We can identify and address potential application issues before examination, and work constructively with examiners should issues arise. Our firm has an excellent track record of successfully obtaining trademark registrations.

3. As a student, your clerkship was mainly dedicated to drafting appellate briefs. What made you decide to pursue trademark and intellectual property law as opposed to appellate law?

While intellectual property constitutes the core of my practice, I do still love appellate law.

One of my most meaningful experiences was as a member of UT’s Supreme Court Clinic, where we wrote and filed an amicus brief on behalf of adoption and child welfare advocates in Hollingsworth v. Perry, a case that re-legalized same-sex marriage in California and helped set the stage for the landmark Obergefell v. Hodges decision legalizing same-sex marriage nationwide two years later.

4. You’re an avid musician who plays with a few local bands – sounds like Austin is the perfect place for you! Where can we catch your next gig, and do you have a favorite venue?

The pandemic took a heavy toll on the Austin music scene, but it’s quickly bouncing back. I’m just grateful to see live music again. For many Austinites, live music was and is our social media.

The day-show was hosted by Wittliff | Cutter’s John Saba and his band San Saba County. They just released a new, highly purchasable record at Meanwhile Brewing Company, which is a fantastic newish venue that I’ve played while filling in with my friends’ band, The Heavenly States.

5. Is there anything else readers should know about you? Any surprising or little-known facts?

My esteemed colleague Joshua Kelly said I should mention that I have an IMDB page. Full disclosure: Austin was a very different town back in the 90s and 00s, when you could wind up in a movie just by playing in bands and breathing. Regardless, I was fortunate to be a part of two fine Richard Linklater films:

On a final note, one of our trial consultants once asked me, “This firm is so much about diversity, what’s your story?” And I said, “Now that you mention it . . .” and let him know that I count myself as a member of the LGBTQ+ community. While originally from the Midwest and by nature a private person, it’s nice to work at a place where I don’t always have to be. A private person, that is. I’ll always be a Midwesterner. Go Blue!